The face of Postpartum Depression 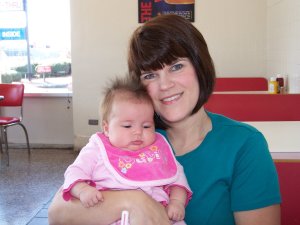 In that picture I look like I have no cares in the world and am the most happy person you will ever meet, right? WRONG! So very wrong! I have suffered from depression for years and it gets much worse after I have babies. I had it after I had Devin, but was in denial and did not get treatment. Luckily, I was able to work through it by going back to work and being “away” for a few hours a day. After I had Makenzie though, I was not able to work through it alone. My PPD began after I had to have an appendectomy not even three weeks after giving birth via csection to Makenzie. I think it was just too much on my body. I sank into a deep depression and had panic attacks at night when my husband would leave for work. I would be fine one minute and raging mad the next. I never thought of hurting anyone thank goodness (that’s actually post partum psychosis- something much worse than PPD), but there were several times when I just couldn’t imagine how I was going to be alone in the house at night when David was at work with these five kids to be responsible for. I would have bad dreams about “forgetting” Makenzie at the mall and wake up in a panic thinking it wasn’t a dream. That’s when I knew I needed help.

I called my OB and he put me on zoloft. It has been a wonder drug. I could almost tell a difference immediately and a few weeks after being on it, David thanked me for taking it- LOL (guess he noticed a bit of a difference too) I’ve had to up the dosage once so far thanks to my body getting “used” to it- but all in all it’s been a remarkable improvement. And the best of all… zoloft is considered safe during breastfeeding so I am allowed to take it while nursing. I still have good days and bad days, but on the meds there are more good days than bad. And I’m happy to report that I no longer have weird dreams about “forgetting” Makenzie, or anyone else for that matter 😉

I’m posting this in case some of you reading this are like I used to be and are ashamed to call your DR and tell them you have PPD. I thought I had to be a supermom and be able to handle everything with grace and if I didn’t then I was a failure as a mom. I’ve since learned that I would have failed had I not gotten help. Calling my OB was very tough; admitting I had PPD was even tougher… but I’m glad I had the courage to get the help I needed. So is my family 🙂

Visit my blog Simply Blessed for more stories about the trials, tribulations and joys of raising five children!

Discuss this in our forum

<a href="https://healthymomsmagazine.net/2009/07/the-face-of-postpartum-depression.html">The face of Postpartum Depression</a>

Potty Time Tuesday | How To Potty Train While Travelling