The words “baked, not fried” are pretty much the epitome of health to me. Over the years I have learned more and more about nutrition. But I’m from Texas, y’all; we deep fry pickles and Oreo cookies. I do own a fryer (that I am quite adept at using), but I limit my family’s intake of fried foods to less than once a week.
The rest of the time, we eat whole grains…baked and healthy. But being the rich food loving family that we are, we are not about to budge when it comes to taste.
Which really is to your advantage, now. Isn’t it?

Eggplant, yum. I love it in meatballs, Italian soups, Eggplant Parmesan and anything with a rich fatty base and a heavy sauce. But it doesn’t have to be that way. And actually, the more simplistic the cooking method, the more that wonderful earthy taste of the eggplant will shine through.
This simple and healthy recipe is for a whole wheat breaded baked eggplant Parmesan. I think you’re really going to be impressed.

For the sauce (serving four to six people), start with a twenty-eight ounce can of whole, peeled tomatoes. Of course, you could take the time to blanch and peel fresh tomatoes; but seriously, you can also just buy the can. Thoroughly drain the juice into a medium sauce pan, and reduce the liquid over high heat for ten to fifteen minutes. Roughly chop the drained tomatoes and toss them lightly with olive oil and salt. Then roast them in a 425 degree oven for fifteen minutes before adding them to the reduced tomato juice and an eight ounce can of tomato sauce.

Roasting the tomatoes will give them a taste comparable to sun-dried. The sauce will need very little seasoning because of the roasted tomatoes’ bold flavor, but season with salt, pepper, garlic powder, oregano and parsley to taste.

While your tomatoes are roasting and your sauce is reducing, peel the eggplant and slice it lengthwise into 1/4 inch pieces. Next, toss the freshly cut slices in a lightly seasoned flour, and set them aside while you prepare your bread crumbs.

Related  How Stress, Gut Health and Autoimmunity Are All Connected

Now, of course, you cannot make Eggplant Parmesan without Parmesan cheese. But blend whole grain bread (one slice of bread per small eggplant) with Parmesan (three parts bread to one part cheese), for a delicious and healthy alternative. Season the bread crumbs with salt, garlic powder and parsley.For the crispiest breading (when baking and frying) dip your pre-floured slices in egg wash (egg and milk) before returning them to the flour (seasoned with salt and pepper). Bathe them once more in the egg mixture before coating them evenly with your whole wheat, seasoned crumbs.

Place the breaded slices on a non-stick pan (for best results, moisten a paper towel with olive oil and wipe down the pan before arranging the slices). Drizzle olive oil over the top and bake the eggplant in a 375 degree oven for about twenty minutes (seven to ten minutes per side). 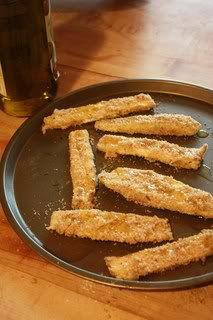 While your eggplant is baking, roughly chop eight ounces of your favorite mushrooms and add them to the sauce to simmer until soft.

5. Drizzle eggplant with olive oil and bake in 375 degree oven

6. Chop mushrooms and add to sauce

Discuss this in our forum

Related  Guest Article- Who am I and where did I go?" A Woman's Guide to Finding Herself Again After Divorce
0/5 (0 Reviews)

How to Have a Happy Healthy Mouth