SHOULDER INJURIES SIDE LINE THE STARS OF AFL AND NRL

Most followers of football (AFL) in Victoria will know that Mark Murphy is out for 8 to 10 weeks. The Carlton star needed surgery on the fractured shoulder bone he received in a collision while contesting the ball. The number of players taking the field this season with taped up shoulders attests to the problem these injuries are becoming to the sport.
Dr Hugh Seward, head of the AFL medical officers association said recently that a research project has begun to investigate the relationship between shoulder injuries and the increased number of tackles in a game. Average number of tackles per game in the 1999 season was 32. In 2009 it had increased to 62. 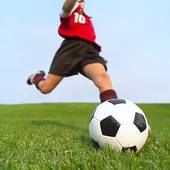 Adelaide Crows football club have been hit with the loss of three top players this season to shoulder injury. Physical performance manager, Stephen Schwerdt, has done extensive research into the problem and has introduced a gymnastic program that he hopes will lower the injury count. The aim is to teach players how to tumble when falling rather than putting an arm out to break their fall. He is also attempting to devise new tackling techniques that have less risk to players. An added problem for the AFL is that young recruited players are coming into clubs carrying shoulder injuries, sustained in the junior ranks.
The NRL (Rugby League)seem to have an even bigger problem with these sort of injuries. The list of Star players presently out of action, or struggling with shoulder injuries is long : Sam Thaiday – Brisbane Broncos, Kurt Gidley – Newcastle Knights, Jarryd Hayne – Parramatta Eels,Cameron Smith – Melbourne Storm, Anthony Watmough – Manly, Chris Lawrence – West Tigers, Jonathon Thurston – N Q Cowboys, Benji Marshall – West Tigers.
Benji Marshall, probably one of the world’s top five players, has had more than his share of woes with shoulder injury. He dislocated a shoulder in the pre season of 2005, which necessitated surgery. In round 5 and round 16 of 2006, he dislocated the same shoulder again, with more surgery. It happened again in the 2007 season and after four previous operations a ‘super reconstruction was done in 2008 which included a bone graft. Marshall has had other debilitating injuries since then, but the shoulder continues to hold up.
Such experiences are obviously hard on players also. ‘It used to be in the back of my mind when making tackles’ says Marshall, ‘ there was a time when I was sort of nervous about whether I could get back to playing, let alone playing well’.
It is difficult to see a complete solution on the horizon for these two codes, hard aggressive contact being a major part of their game.
About this author:
Sharon Freeman  is one of the leading shoulder surgeons in Sydney.

<a href="https://healthymomsmagazine.net/2012/08/shoulder-injuries-side-line-the-stars-of-afl-and-nrl.html">SHOULDER INJURIES SIDE LINE THE STARS OF AFL AND NRL</a>