Yale University researchers recently published a study in the journal Proceedings of the National Academy of Sciences which indicates that oxytocin makes children with high-functioning autism more attuned to social cues.  As a mother of two children with Autism Spectrum Disorder (ASD) I found the results of this study significant and reassuring.  One out of every ten children in the United States have ASD.  This common neodevelopmental disorder characterized by devastating difficulties in social interaction, communication, and repetitive or restricted behaviors impacts millions of American families.

The study was lead by Ilanit Gordon along with her team of Yale researchers.  They administered an oxytocin nasal spray to 17 children and adolescents with ASD between the ages of 8 and 16.5.  The researchers wrote that they tested oxytocin on children because previous studies had not included children younger than 12 years of age.  The team hypothesized that “during a task involving social judgements, oxytocin vs placebo would heighten brain activity in the neural circuits supporting reward as well as social attention and social cognition.”

The participants were given both the placebo spray and the oxytocin spray at two separate visits.  They were then assessed using the “Reading of the Mind in the Eyes Test.”  The children were shown social pictures with eyes and non-social pictures of vehicles. They were then asked to label a mental state from pictures of the eyes or to label the category of automobile presented in pictures of vehicles.  After that their brain activity was measured via magnetic resonance imaging (MRI).  The researchers found that, compared with the placebo group, the participants who received a single nasal dose of oxytocin experienced enhanced activity in the brain.

The study indicated that when children with autism are given oxytocin along with practicing social skills they may be more likely to interact with others socially.  I hope someday that my two children with ASD will be able to benefit from this study.

We are on Roost! 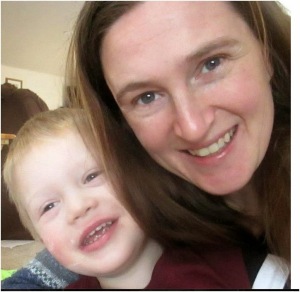 Cascia Talbert is a busy blogger,  and mother of five children, living in Spokane, WA. With a B.A. in history and law and a passion for writing and staying healthy, she started The Healthy Moms Magazine in 2007. The Healthy Moms Magazine is currently ranked the top health blog for moms. Ms. Talbert believes that if mothers are well educated on health issues and how to stay healthy, they can pass that information down to their children and reverse the childhood obesity statistics in the U.S.

Ms. Talbert  runs the Healthy Moms Social Network on Ning, is the founder of Healthy Moms Media, and is the Chief Marketing Officer for Talbert Nutrition LLC. You can follow her on facebook.com/TheHealthyMomsMag, and twitter.com/cltalbert.

If you liked this article you might enjoy these stories.

<a href="https://healthymomsmagazine.net/2013/12/oxytocin-may-help-children-with-autism-new-study-suggests.html">Oxytocin May Help Children with Autism New Study Suggests</a>

2013 Holiday Fashion for Moms on a Budget